Although he distinguished himself as part of the Carl Hayden High School Junior Reserve Officer Training Corps, he is forbidden to join because of his status as an undocumented immigrant and he is recommended not to present himself to any government office to avoid being reported to the Immigration and Customs Enforcement ICE agency.

Vazquez lies to his mother about his progress in the Army and starts investigating about the Underwater Robotics Competition, looking for another way La vida robot move ahead in life. The principal Jamie Lee Curtis questions his job stability record, but eventually hires Cameron because of his Ph.

As part of his normal teaching responsibilities, Cameron is assigned to oversee an engineering club, where he meets Vazquez, who is looking for help to build a remotely operated underwater robot for the UCSB robotics competition.

After agreeing to help, Arcega takes the technical lead of the project and sketches an early design of the potential robot. Before starting to build it, Cameron suggests a prototype so they can do a proof of concept model.

Cameron starts to learn about the competition rules and requirements, which demands the robot to successfully complete a series of underwater tasks. They later recruit Luis Aranda, for being strong enough to help lift the machine in and out of the pool. 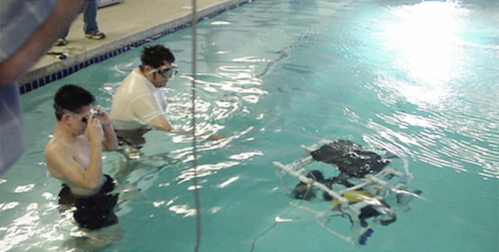 The small budget forces them to scale back the original design and to innovate in how the robot is constructed, which they end up naming "Stinky" because of the smell it had when they glued it together.

Facing several highly funded college teams, their robot finished the practical segment of the competition in fourth place with 75 points after missing three tasks. The night of the awards ceremony, they are given a Special Achievement award, which the team assumes is their final result.